The storage of electricity from low or zero carbon generation sources is of vital importance to addressing the climate crisis.

The availability of different sizes and types of battery is needed to broaden the applications to include buses and trucks, home storage systems, ships and aircraft. OXIS Energy is one of the Oxfordshire companies pioneering the development of a new generation of batteries to solve these problems.

While industry analysts have struggled to understand why the development of new battery technology appears to move slowly, those including Dr David Ainsworth, chief technology officer of Culham-based OXIS Energy have been painstakingly working through the myriad combinations of components and chemistries to provide the solutions. 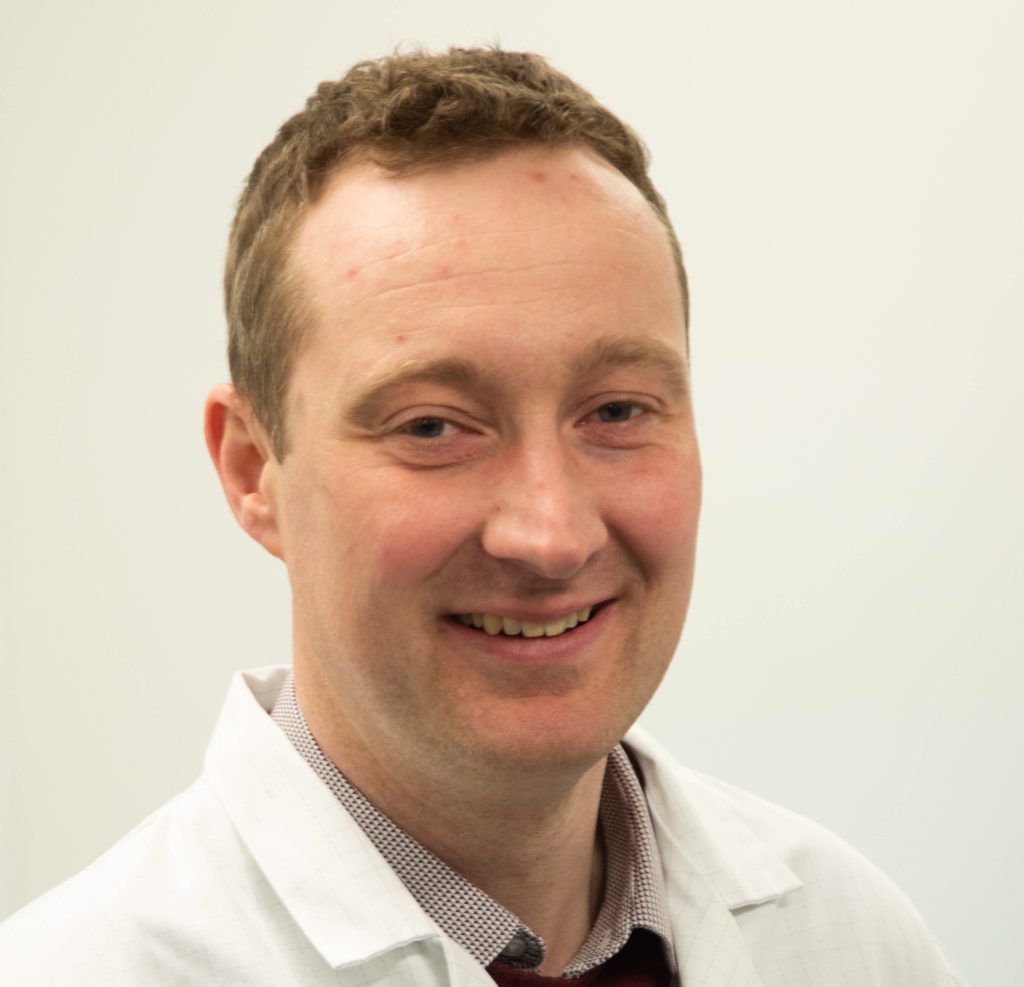 OXIS Energy has been involved in fundamental research into batteries since 2004, and is well on the way to overcoming some of the main limitations of lithium ion (Li-ion) chemistry. Its solution lies with the use of sulphur as the active component of the cathode and lithium metal for the anode. Li-ion batteries employ a metal oxide cathode and a porous graphite anode.

Batteries are made up of three main elements: the positive and negative electrodes – the cathode and anode, and the electrolyte between them through which, in rechargeable batteries, the reversible reaction occurs via the movement of ions (charged chemical species).

The types and configurations of the materials used in each of these three components affect the performance of the battery system, and provides very large scope to change it.

The use of sulphur confers several advantages as it has a very high specific energy density, the energy as a ratio of its mass. The combination of lithium metal and sulphur delivers one of the the highest theoretical capacities of any electrochemical system, at around 2,500 Wh/Kg (Watt hours per kilogram), which is typically 3-5 times the theoretical energy density of Li-ion chemistry. However Dr Ainsworth warns such comparisons mean little until the practical implementations can be directly measured.

If there was ever a field in which the devil is in the detail, this is it. The best Li-ion cells today deliver around 260Wh/Kg, about a third of the theoretical maximum. Dr Ainsworth maintains that when fully developed, OXIS’s Li-S chemistry will provide upwards of 600Wh/Kg, a very significant improvement in power-to-weight ratio.

While the energy density of sulphur is advantageous, there are challenges to making effective use of it. Sulphur is not a good conductor of electricity, nor does it lend itself to being formed into a solid structure. OXIS’s solution to this is to mix finely ground sulphur and carbon with a polymer binder and coat the resulting slurry onto a fine aluminium foil. The resulting material, as thin as a piece of paper, forms the cathode material. 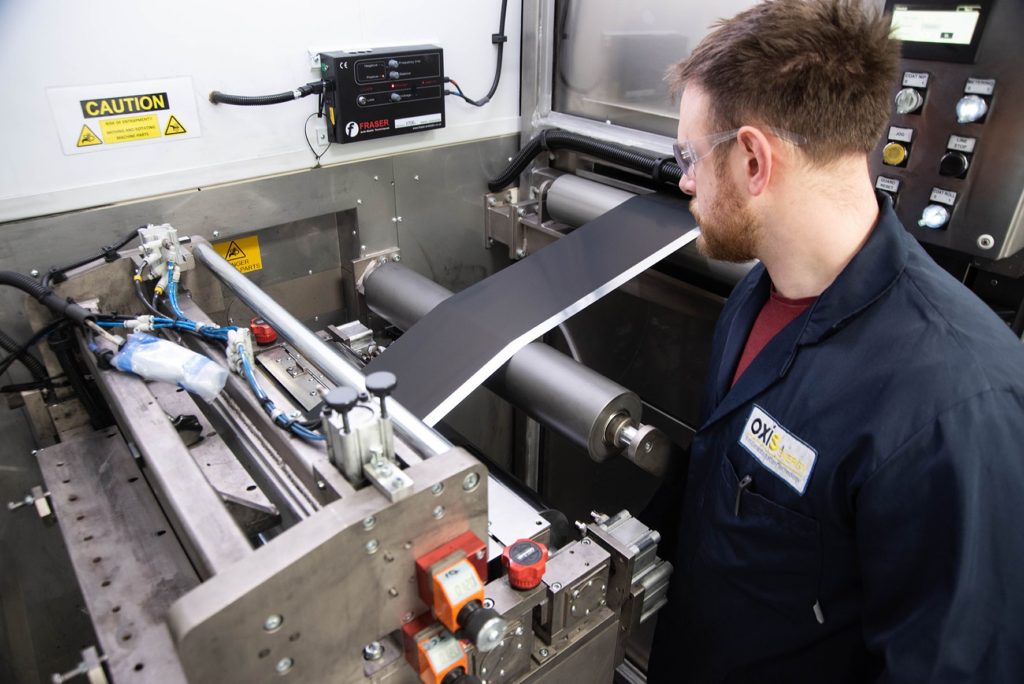 The anode is made from thin metal lithium sheet and the two electrodes are separated by an electrolyte made from an organic solvent with lithium salts, that provide the ions for the reactions. The cell is formed from multiple layers sealed within an aluminium foil envelope and has a discharge voltage of 2.1V.

Among the design considerations for batteries is safety and Li-ion batteries have had their challenges, particularly when damaged. The organic solvent used in the electrolyte can be ignited if the battery overheats and gets punctured. Recent incidents onboard airliners have focused attention on this. The OXIS scientists have ensured that these risks are minimised; the batteries can sustain a puncture without untoward consequences. 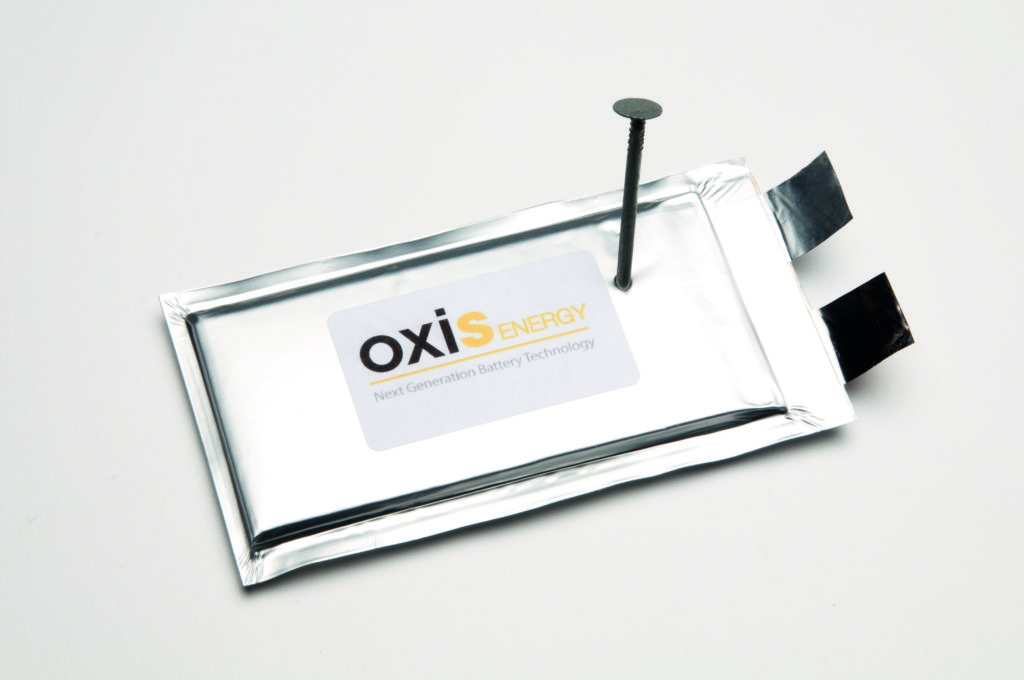 When asked what are the remaining steps to commercialisation for this new approach, Dr Ainsworth explains there are three main activities with which the company is currently engaged. The R&D team is focused on performance improvements, especially in increasing the charge cycles of the batteries, where cycles of several hundred do not yet meet the requirements of the automotive industry.

OXIS’s production engineers are working on scaling up the manufacturing processes. The Culham-based facility can produce several thousand cells in-house but this needs to be increased to hundreds of thousands. The company is planning a new cell manufacturing plant in Brazil, a country that has one of the largest fleets of buses in the world, and a component production plant in South Wales.

Thirdly, OXIS is engaged with key customers on development projects. This involves building full-scale demonstration systems for manufacturers in the aerospace and automotive sectors.

Recently, attention is being drawn to the issue of recyclability of batteries. Lithium-sulphur batteries have something to offer in this respect. The cells to not include metals such as cobalt, which is used in Li-ion cells, and recycling processes might expect to retrieve the lithium metal and be left to dispose of non-toxic sulphur and carbon together with very small amounts of aluminium.

The development of the company, originally funded by venture capital investors, has been supported by a large number of different investors including Sasol (South Africa), Umicore (Belgium), Samsung (South Korea) and Arkema (France), and more recently, by Safran (France), Confrapar (Brazil) and the Development Bank of Wales. So, OXIS is already an international player and likely the leading developer of this technology which also has adherents in the US and Korea.

The company has also just announced a tie-up with the Sanyo Trading Company to take the latest in Li-s cell and battery systems technology to Japan. Sanyo Trading will concentrate on markets like aviation, marine, defence and heavy electric vehicles, such as trains, buses and trucks. Masanobu Shintani, president and chief executive of Sanyo Trading says:

“From our 40 years business experience in the automotive industry, we believe that Lithium sulphur batteries will be one of the most promising solutions for electrification in this industry.”