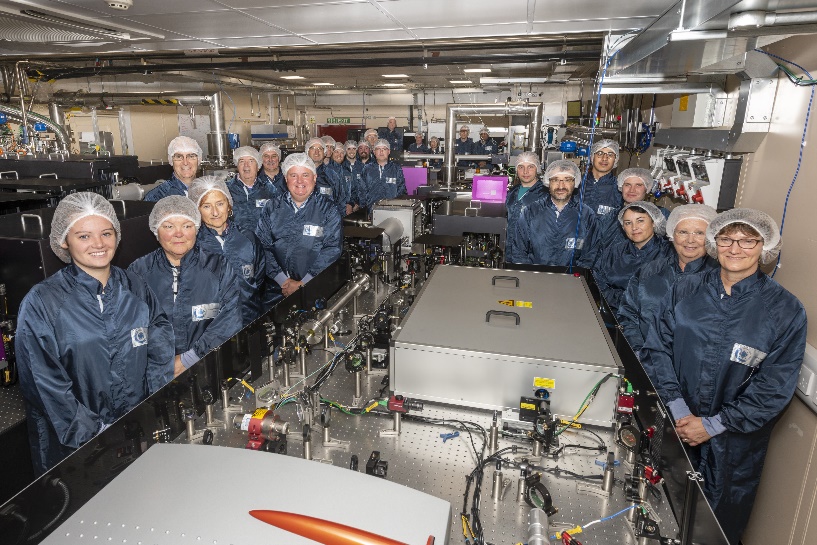 A unique laser developed at the UK’s Central Laser Facility (CLF) will synchronise with the European X-Ray Free Electron Laser (XFEL) to compress and heat samples of materials to pressure and temperatures only found in the interior of stars and giant planets. The UK scientific community is foremost in the physics of extreme conditions and is expected to be among the first users.

The DiPOLE 100-X laser was developed at the Centre for Advanced Laser Technology and Applications (CALTA), a Division of the CLF at Rutherford Appleton Laboratory (RAL) in Harwell.

share
go deeper
The UK is a core partner in the European XFEL facility in Germany. XFEL is the largest, most powerful X-Ray laser in existence, with a brilliance that is a billion times higher than any other conventional X-ray radiation source.

By using this new DiPOLE 100-X laser in combination with the extremely bright, intense X-ray beam produced by the XFEL, scientists will be able to probe the atomic structure and dynamics of materials under the extreme conditions found within the core of a planet where temperatures can be up to 10,000°C and pressures can be up to 10,000 tonnes per square centimetre. The instrument will also be useful in industry, pure and applied science, security and medical research.

According to Ulf Zastrau, group leader at the instrument for High-Energy Density science at European XFEL:

“It is thought that the form of elements such as carbon and iron found on some of these exoplanets does not exist elsewhere. Until now, it has not been technically possible to study these fascinating worlds before, because we could not create such extreme temperatures and pressures in the lab. Now, with the arrival of the new DiPOLE 100-X laser at European XFEL we are a step closer to being able to study the behaviour, composition and conditions of these planets. This really opens up an entirely new field of scientific exploration.”

High power lasers have been around for the last fifty years. They fall into two main groups:

High average power lasers are available that deliver many kilowatts of average power, but they are still not powerful enough to deliver fundamental science and advanced applications.

High peak power lasers provide much more laser power, up to a million times more, but in very short duration pulses. These super-high-power lasers are limited to, at most, a few pulses per minute and this limits their usefulness for many industrial and scientific applications. The typical overall efficiency of these lasers is around 0.1 per cent; 99.9 per cent of the energy input ends up as waste heat which is problematic.

DiPOLE lasers use an advanced laser diode pumping scheme that delivers an overall efficiency of 25 per cent, 250 times better than traditional systems. DiPOLE provides 10 pulses per second; the development team is working on a version that will produce 100 pulses per second. This makes the device useful to industries sensitive to process efficiency and product throughput, and to data intensive areas of science where hitherto unobservable effects are detectable by averaging of many laser pulses.

The combination of DiPOLE 100-X and the XFEL laser works by synchronising the pulses. The DiPOLE laser compresses and heats the target and the powerful XFEL laser is used to analyse the details of the target material. The 10 pulses per second repetition rate will enable diagnostic signals to be averaged, greatly increasing the sensitivity of the measurements. 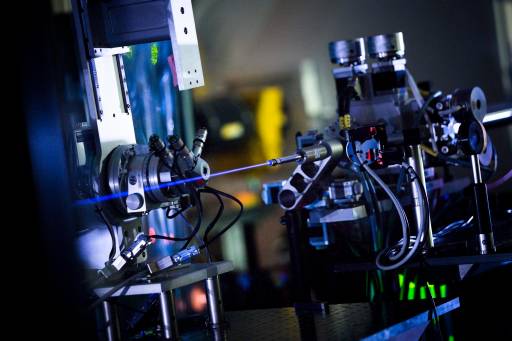 The DiPOLE 100-X laser was delivered to the European XFEL site near Hamburg in Germany at the beginning of the year. A joint  team of XFEL and CLF scientists have been working on its installation in its underground laser “hutch”. Commissioning experiments were planned to begin in the summer followed by integration and synchronisation with the XFEL, but the Covid-19 pandemic has impacted the schedule.