A forty-tonne, eight-metre wide eco building constructed in Oxford has been sent 300 miles to the site of a Roman Vindolanda fort in Northumberland, where it is to house a new visitor centre. Green Unit’s ARC II modular eco-building was transported by road in five eight-tonne sections and installed on the site in March, shortly before the national lockdown.

The ARC II is Green Unit’s new, wider version of its popular eco-friendly modular buildings and is suited to situations such as visitor centres, restaurants and retail. Designing and transporting this larger, heavier building wasn’t without its challenges, as Green Unit founder and managing director Jonathan Finnerty explained: “The ARC II is eight metres wide, so we needed to design an internal frame to support the increased span that didn’t interfere with the ARC’s elegant internal space.

“The frame has to support at least eight tonnes when each road transportable section is being lifted, and had to be rigid so that the glazing sections were not at risk from cracking. Detailed consultation with our structural engineer for the internal frame and the lifting frame design was critical, as was the planning and lift execution with our crane operator.” 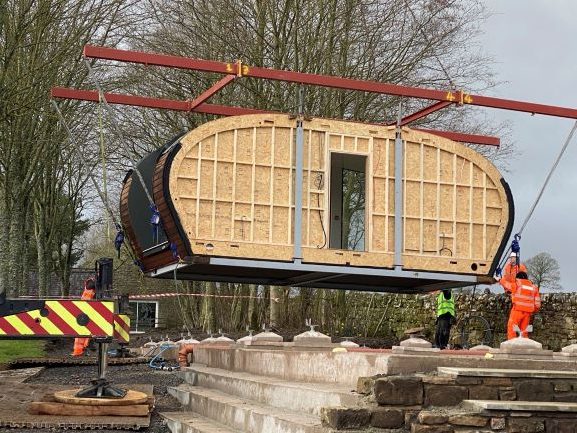 Installing one of the five sections of the ARC II. Pic: Green Unit

The Vindolanda Trust’s building includes underfloor heating powered by the site’s solar power, and it is ventilated by heat recovery and ventilation (HRV), which extracts warmth from outgoing air whilst bringing in fresh air from outside. The internal layout includes open space for education and archaeology work, where staff and excavation volunteers will be able to wash, review and catalogue Roman artefacts, and an enclosed site office. 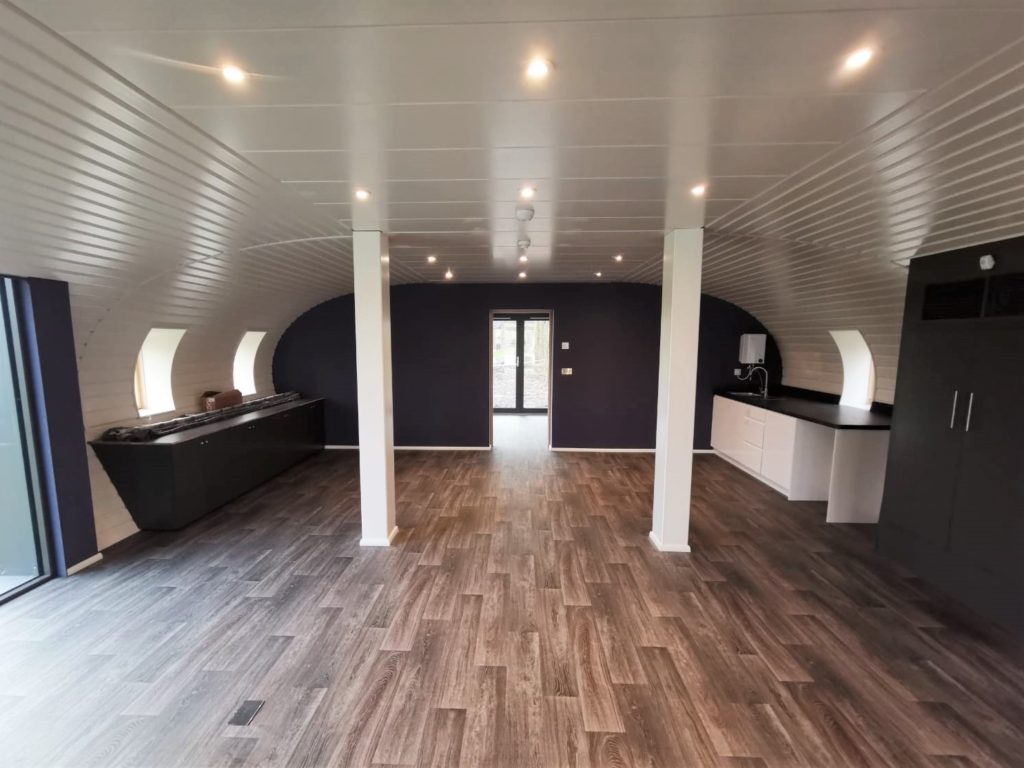 The ARC II took three months to build and finish, and was installed on site in six days. Green Unit aims to bring this timing down significantly by adding more staff and shift patterns at its factory, a 21,000 sq m former aircraft hangar near Culham Science Park in Oxfordshire. The firm’s order book for similar buildings is filling up, with commissions for a Visitor Centre for Avon Wildlife Trust, classroom blocks for a local state school, and accommodation units for Harwell Campus in the pipeline.

When the Vindolanda site reopens, the ARC II will become the Robin Birley Archaeology Centre, named after the Trust’s founder, and marking its 50th anniversary stewarding this UNESCO World Heritage Site. When deciding on a new building, Green Unit’s eco-pod’s curved design appealed to the Trust, as it is reminiscent of the Nissan huts Robin Birley used when it first opened in 1970. 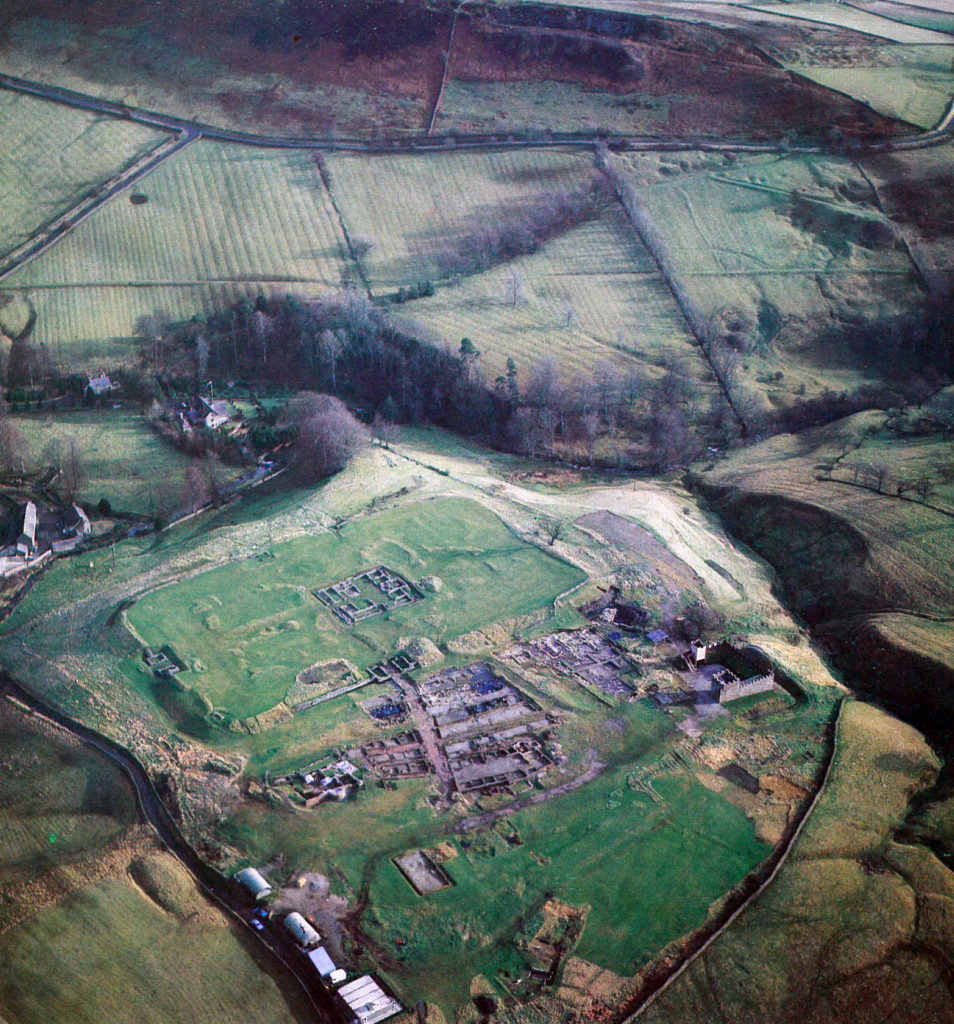 Doubtless the new building is a big improvement on the old sheds it replaces, as Vindolanda Trust chief executive Dr Andrew Birley noted when he said it is “perfectly at home within Vindolanda’s natural landscape.” 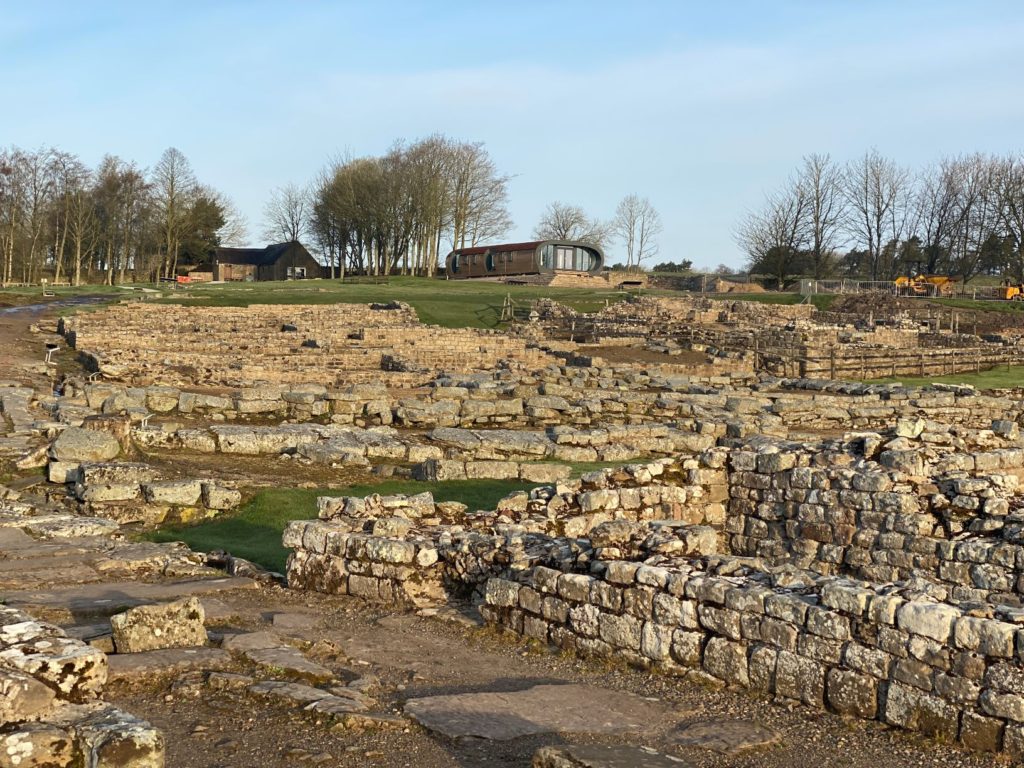 The ARC II within the Vindolanda. Pic: Green Unit

But the building’s eco-credentials and build process were important factors in the Trust’s decision to go with the ARC II:

“As a World Heritage Site, sustainability is incredibly important to the Vindolanda Trust, and we felt that there was a great fit with The ARC’s ethos,” said Birley, adding,

“The minimal impact of an offsite build was very attractive too, especially in terms of the relative lack of disruption to day-to-day operations at our Vindolanda site which is normally open 364 days a year. The team at Green Unit did an excellent job in keeping us informed about the progress of the build with weekly updates, often with photos and video of the construction. It was an exciting day when the building was finally delivered to site in early March.”

Watch The Vindolanda Trust’s timelapse of the ARC II’s arrival and install: