Technology, by reducing the fabric of creative content to data, is blurring the boundaries that define a piece of work and who owns it. In a keynote speech to the 2019 MIX Conference on experiential storytelling, Charisma.ai chief executive Guy Gadney warned creatives of the dangers of enabling their digital content to pass unwittingly into the hands of digital monoliths.

‘With the increasing convergence between creative industries and artificial intelligence, there is an emerging misunderstanding of how the tech world sees creativity, and this is important for publishers, authors and the broader creative industries.

To frame this, it is important to understand the basics of AI. In essence, AI is like a child-computer. It can learn, be educated and trained, and just like a growing child, it needs feeding.

AI’s food is data and to train an AI you need to feed it on data. Lots of data. And like a child, it will grow well if you feed it on good food.

Some companies try to aim for quality, and turn to published books as sources for their data. In the world of natural language, there is value in the content of existing works.

Perhaps one of the first indicators of this was the 2005 legal case Authors Guild vs Google. In 2004, Google started scanning and offering books as part of its Google Library project, now called Google Books. It hailed this as an enormous democratisation project, expanding the reach of human literature and knowledge.

A year later, the Authors Guild sued Google for breach of copyright. The case continued—and so did Google’s scanning. In 2010, Google estimated that there were 130 million titles in existence, and stated its goal: To scan all of them.

The concern from the Authors Guild, and of course from publishers, was that by offering copyright titles, Google would damage revenues to authors, publishers and copyright owners.

By October 2015, Google had scanned over 25 million book titles.

In 2016, after the US Supreme Court found in favour of Google, the then Authors Guild president, Roxana Robinson, summarised: “We’re witnessing a vast redistribution of wealth from the creative sector to the tech sector, not only with books but across the spectrum of the arts.”

Now, imagine I am producing a film and want to quote a section of a book in the film, and use part of an audio track. As well as enhancing the story within the film, this will grow the value of the film product itself. So the process I take is to contact the copyright holders, do a deal and carry on with my production. Even if I base my film loosely on an existing text, I clear the rights. There are legal, moral and commercial reasons to do this.

In contrast, Google is using scanned copyrighted material to build its current and future products, and as far as we can tell from the settlement with the Writer’s Guild seven years ago, without any reference to authors being compensated for the use of their work.

For example, Google’s Talk to Books project allows users to ‘make a statement or ask a question, and the tool finds sentences in books that respond, with no dependence on keyword matching. In a sense you are talking to the books, getting responses which can help you determine if you’re interested in reading them or not.’

Google has been similarly looking at the museum and arts sector. I wrote in a previous article that many museums are placing their images in the public domain as part of an advanced digital strategy to create worldwide creative usage of their content. While a museum’s public service approach is to allow commons access to its work, the 360 StreetView version of that museum that Google photographed has a discrete “copyright Google” at the bottom of the screen — so the virtual tour of the museum belongs to Google.

True, the marketing strength that Google brings to large and small art museums creates a global awareness that could only be dreamed of before digital media.

But look ahead: new developments in virtual reality are all about immersion, and Google is a key player in its development. As this technology improves, the experiential gap between visiting a museum in reality and visiting it virtually will diminish, and with it, the reason for people to visit the physical space.

VR will allow for the emotional connection with art to be recreated from the digitised versions. Once an artefact has been digitised, it does not impact Google’s service if the physical location exists or not.

Remember that Google is a search and advertising company. Its primary profits come from its unparalleled ability to tailor advertising to an individual segment of one – you.  And the advertising it displays is the trade-off that allows you to see its search results, its YouTube videos and its maps for free. As you use its services, it builds up a profile of you, which it sells to advertisers.

While this seems like the most enormous copyright abuse in history — and indeed it could be — it is more broadly symptomatic of a wider disrespect by the technology industry towards the creative industries.

Certainly there has for a while existed a valley of misunderstanding between the tech and creative world, and it is important for the health of both sectors, and humankind itself, that this valley is bridged as soon as possible.

When I joined Penguin Digital in the mid-1990s, our IT manager referred to all the books we published as ‘data.’ You can imagine how this went down with the editorial teams at the time! Yet with hindsight, his outlook was prophetic.

This year, in his book The Creativity Code, the Oxford mathematician Marcus du Sautoy proposes that computers can produce art like Rembrandt’s. It seems like art and creative writing have now become a summit for AI programmers to conquer.

Firstly, it makes the cultural supposition that art is somehow a technical problem to be solved. It is not. This perspective belittles the creative industries and will have an impact on funding, perceived quality and indeed on the academic, practical and soulful journey that it takes to become an artist.

If art is somehow perceived as something a computer can conceive better than humans, and infinitely replicable, what hope do the true artists have?

Du Sautoy cites Christie’s selling an AI-generated Rembrandt-style artwork for $350,000 as legitimisation of the value of AI and art. It categorically is not. Christies recognised a novelty, all within the highly commercialised world of international art auctions.

Secondly, there is no merit to humanity in getting AI to create art. Indeed it is a waste of AI’s strength, to try to anthropomorphise it into recreating human creativity. It should be used to solve problems that are NOT able to be solved by humans, but whose solutions are profoundly needed by humankind – education, inequality, climate change, population growth, energy efficiency, new politics. These are valid and urgent challenges that AI can solve.

Thirdly, and regardless of any futuristic developments, existing works of art should not be used to create technology projects without recompensing the vast numbers of people who have contributed their works to it – whether knowingly or unknowingly.

Ultimately, and most importantly, we must recognise that as technology companies like Google and Amazon seek to engage audiences with stories, conversations and entertainment, they will be looking to the creative industries as fodder.

While some of the proverbial horses may have bolted due to decisions made in the past, this is not the end.

This is our time to define our own narrative and decide what future we want for our stories. We need to understand that the major technology companies are not benign, and they think far into the future. Seemingly fun experiments with AI ‘talking in the voice of a book’ have implications that will travel down to whether an author can afford a coffee.

So this speech becomes a call to arms. A call to words.

A call that control of the future of the creative industries should not rest with monolithic search and advertising companies.

So beware of geeks bearing gifts. Pause before you partner. Don’t default to letting Google scan your libraries, museums and galleries. Don’t let Alexa listen in on your life, your love and your arguments. Do query your presence on Facebook.

Do understand that words are powerful, but also need protecting.

Do understand that, where advanced technology is involved, there are moral decisions that are being made, and without us at the table, these decisions will only have company objectives at their heart.

Be very sceptical of any company’s ‘AI Ethics Board’, which is a compromised jury.

As storytellers, we are smart, creative and economically vulnerable. But we have stories and creativity that are valuable.

To recognise this is the first step towards being aware of the value we have to technology monoliths, and why, as we head towards the dawn of a new phase of technology, we need to stop them trying to recreate us inside their machines, and instead work jointly to safeguard the importance that human creativity has in all our future.”

This is an abridged version of a keynote speech delivered at MIX Conference 2019 by Guy Gadney, chief executive of Charisma.ai, fellow in Automation of the South West Creative Technology Network and chairman of Trustees at Arts at the Old Fire Station in Oxford.

MIX Conference is an international forum for experiential storytelling, encompassing works that foreground the experience of the audience or reader. The event is annual, organised by Bath Spa University.

The story continues: Oxford firm launches AI-powered interactive graphic novel app
Writers try out their creative ideas on AI storytelling platform
Using AI to engage with the human spirit
BOOK REVIEW: To Be A Machine by Mark O’Connell
Exclusive: Behind the scenes at Rebellion’s Didcot Film Studios – one year on
share this article 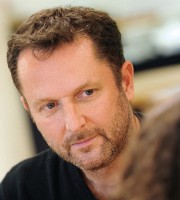 Guy Gadney is CEO of Charisma.ai, Fellow in Automation of the South West Creative Network and Chair of Trustees at Arts at The Old Fire Station, Oxford