An Oxfordshire company whose technology will provide internet for European astronauts on the International Space Station (ISS) is gearing up for a spacewalk, during which astronauts will install the device.

MDA UK’s communications terminal, which will allow significantly higher communications bandwidth and improve the station’s broadband connection, was delivered to the ISS last week by the Cygnus cargo capsule.

The Columbus Ka-band terminal (COLKa) is now safely on board the ISS and ready for the next step in the delicate operation. Two astronauts must go around the outside of the station, in order to attach it to the Columbus module.

The spacewalk is likely to take place between April 10-13, to coincide with a scheduled crew changeover which will see twice as many astronauts on the ISS.

MDA UK’s managing director David Kenyon told TechTribe Oxford: “The Space Station is like a big floppy bit of Meccano, it’s not a rigid structure. The thing is flopping about the whole time, as the astronauts move, the solar rays move, and the robot arm is moving while we’re trying to point an antenna at a geo-stationary spacecraft 20,000 miles away.”

There will be an in-orbit test period during which Harwell Campus-based MDA’s team will work to improve algorithms and performance.

Kenyon said they are “keen to crack on and do that as soon as they’ll let us”.

He added: “The tracking, pointing and keeping it pointed in the right direction is an extremely non-trivial job. We’re fully anticipating that all the stuff we’ve done in the modelling will prove to be mostly correct and mostly work, but it’ll drop out here and there. Just like when you get a new Sky dish at home, it never works the first time.” 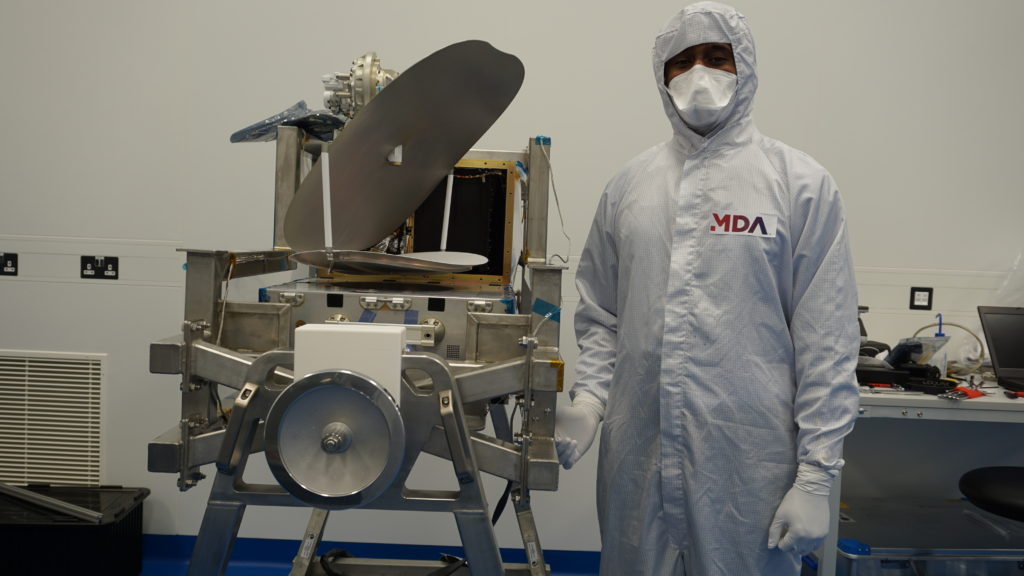 MDA UK won the European Space Agency contract to supply the device five years ago, and has since been developing what is the UK’s first major structural contribution to the ISS.

The ESA runs 40 experiments every six months in the ISS. Instead of having to share the American system, the new COLKa terminal means European astronauts will soon have their own, independent connection to the ground.

The device, about the size of a suitcase, will make it faster and easier to send high-definition scientific video and data to Earth, allowing researchers to see the results of their experiments in near real-time.

The successful Cygnus shuttle launch last week was the third-attempt at launching. The first was aborted because of a problem with the fuel pressurisation system on the ground, while the second was cancelled due to weather conditions.

“We’ve had a lot of fingers crossed over several days, because of the launch delays,” Kenyon said.

“It’s extremely exciting that our first piece of UK-built and integrated hardware is finally going to be up there.”

Speaking on BBC Radio 4’s Today programme on the day the terminal was delivered, the UK Space Agency’s Libby Jackson likened European astronauts having to use NASA’s communications links as “sharing the next-door neighbour’s broadband”.

She explained: “The amount of science data that’s been able to come down has been quite limited and scientists have been having to wait months for their images and science data to arrive.

“This is going to allow those scientists to get the data in real time, so they’ll be able to respond to what they’re seeing. This means their science experiments will get better, we’ll get better results and they can take that knowledge and help everybody much more quickly.”

Once up and working, the COLKa device will send its precious data back to the European Data Relay System (EDRS) antenna on Harwell Campus.

The know-how gained from designing, building and running COLKa could also be used for ESA’s communications package that is being designed for the Lunar Gateway – an outpost more than 1,000 times further from Earth than the International Space Station.