Death Valley in the US Pic: Andy Falconer on Unsplash

From refugee shelters to blockchain: Vinay Gupta’s mission to save the world

His invention helps people suffering from the effects of global warming, so it seems apt Vinay Gupta experienced his ‘eureka moment’ in the middle of a desert.

Entrepreneur and engineer Gupta is the brains behind the hexayurt, a deceptively simple shelter that houses a family of five and can be built for less than £100.

Cheaper and more durable than a tent, the six-sided hexayurt can be created using everyday materials such as plywood, heavy-duty tape and insulation.

It takes a couple of hours to assemble and can be taken down and transported to wherever needed, to provide temporary housing for refugees after fire, flood, famine or war.

The story of the hexayurt dates back to the mid-1990s, Gupta told the audience at an Oxford Technology & Media network event at Modern Art Oxford.

share
go deeper
It was 1995 when curiosity drove Gupta to visit The Farm, a hippie commune in Tennessee founded in the 1970s and known for its work on global issues such as disaster relief, alleviating poverty and agriculture.

While there, Albert Bates of Worldwatch Institute and permaculture fame, introduced Gupta to environmentalism – setting him on a path that would dominate his life for the next 25 years.

Gupta recalls a life-changing conversation with Bates, who told him: “There’s this thing called The Environmental Crisis and it turns out we’re running out of environment’.

After dazzling Gupta with statistics on topsoil, deforestation and global warming, Bates went on: ‘It’s pretty much inevitable at current rates, we’re going to have a real crisis in the future. Just thought you should know, because you seem like a bright spark and you should do something about it.’

“It totally reoriented my perspective. It was astonishing,” Gupta adds.

Bates set Gupta the task of working out how to make a geodesic dome from industry-standard 4’x8′ (1.2×2.4m) sheets of plywood, with virtually no waste. After spending six months on this project and “getting precisely nowhere”, he left The Farm and headed back to his job with the Air Force.

The next five years were spent in the tech sector until, in 2002, he joined an energy policy think-tank where a colleague asked if he could make a refugee shelter that would flat-pack onto the back of a truck.

He recalls his first thought was: “I’m a software engineer, not the other kind of engineer”, before remembering his work at The Farm several years earlier and deciding to “give it a shot”.

He explains: “I got out a piece of paper and asked the archetypical software engineering question: ‘What’s the simplest thing that could possibly work?’

“So, I draw a 4’x8’ sheet, divide it into triangles A, V, A, cut those out and start putting it together. Sure enough, you can make a roof out of those pieces. Then you make a wall under the roof, because the pieces are all the same size, and you’re done. There’s your shelter.

He remembers the exact moment he realised it ‘worked’ as in, it was sound-proof, stayed cool during the burning sun of the day and was warm at night.

“I opened the door in the morning, and there was a one-metre visibility dust storm ripping past the shelter.

“Tents were flapping, people were running around yelling – it was total chaos,” he recounts.

“I closed the door, and it immediately stopped. It was then I realised that although it was just cardboard, 3M tape and plastic foil, I hadn’t even known the dust storm was happening, until I’d opened the door.

He adds: “That {moment} set the trajectory for my life, because I knew going from a single unit at a festival to providing cover for hundreds of millions of people, which is what we’re going to need, would take decades.” 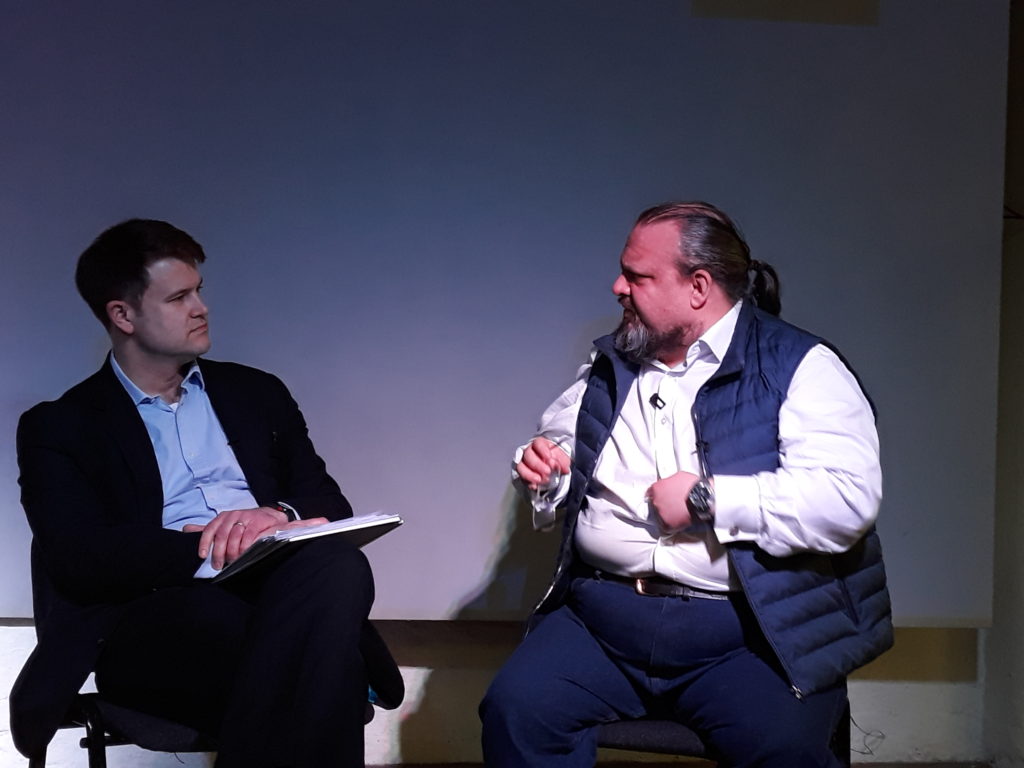 Working in advance of most other people’s understanding of the problem made it difficult to attract funding.

He recalls: “I’d sit down with people and explain we’re expecting a hundred million climate refugees 20-30 years in the future, so we need to do funding, technology and research now. People’s eyes would roll back into their heads, and they’d just stare into space.

“When someone says: ‘Thirty years in the future, we’ll need to re-house 300 million people and it takes a long time to do things, so we have to start now’, people think you’re insane,” he adds.

Things began to change about five years ago, mainly due to a number of high-profile climate-change linked disasters across the developed world – most recently the Californian and Australian wildfires – prompting those in power to sit up and take notice.

The durability of the hexayurt is an advantage where shelter is needed for several years or even decades, when a population is unable to return home.

“We’re talking about very large-scale movements. With five per cent of the human race on the march, it’s difficult to see how to manage without thinking in terms of ‘temporary cities’, rather than refugee camps,” he points out.

Among the many supporters of the hexayurt is the US Department of Defense. Hexayurts are an integral part of the global knowledge-sharing disaster relief project STAR-TIDES, and came close to being deployed in 2010, after the Haitian earthquake.

They are also beloved of festival goers around the world, particularly the Burning Man crowd, who build them in their thousands.

Gupta could have made millions from his design but instead, chose to place the hexayurt firmly in the public domain. Consequently, there’s no copyright or patent, meaning anyone is free to build as many as they like.

As well as dreaming up the hexayurt, Gupta has somehow also found time to co-launch the world’s second largest blockchain, Ethereum.

In a slightly surreal twist, Mattereum has a crypto partnership with actor William Shatner concerning Star Trek memorabilia, and the company also works with Stradivarius violins.

Gupta believes the global financial and trade logistics systems are underperforming, mainly due to poor specification, and sees blockchain technology as a big part of the solution.

“Normally when you buy something online, you have doubts about the fitness of purpose, the quality of the goods or the delivery schedule. That means we’re constantly applying contingency in case the stuff isn’t what we thought it’d be,” he points out.

Getting rid of the so-called ‘doubt discount’ saves waste and makes money, he argues. The global international implications of this are that if most of our manufactured goods have extremely detailed, reliable, multi-dimensional specifications available, we can use software to do the buying for us.

If it’s automated, with a website tasked with doing the bargain-hunting on our behalf, it begins to look more like a flight-comparison website but for the material world.

Add into this a Visa-style model of payment, where insurance and dispute resolution are ‘baked-in’ and it allows for buying cars, houses and other heavy-weight purchases.

Gupta points to Apple’s supply chain as an example of how the global supply chain could, and should, operate.

“It’s very integrated and international,” he points out.

“They’ve stripped out practically all the bureaucracy so it’s extremely transparent, and the efficiency is unbelievable.

He explains: “Software systems will become powerful enough that they smooth out all the international barriers in the same way we had to do in order to get the web to work. It’s the same process. It’s the next step.

“That’s where we’re going – just don’t expect it to be tomorrow,” he adds.

Vinay Gupta was in conversation with clean-air consultant Alex Bigham, as part of Oxford Technology & Media Network’s ‘10 Years to Save The World’ series. To find out about other upcoming OTMN events, see TechTribe’s events listing.