Could ammonia be the route to widespread low carbon air travel?

Reducing or eliminating the airline industry’s carbon emissions is one of the toughest technological challenges we face in mitigating the effects of climate change. A new proof-of-concept study conducted by Reaction Engines and the UK’s Science and Technology Facilities Council (STFC) at Harwell in Oxfordshire has demonstrated a means of using ammonia as a fuel for jet engines.

While battery-powered engines are viable for cars and even propellor driven light aircraft, the energy required to fly a large passenger aircraft would necessitate batteries too heavy to be workable and a source of energy that is physically incompatible with jet engines.

Biofuels have been touted as an alternative source of fuel, but they still emit carbon dioxide, soot and sulphur oxides, and have been proven to have negative impacts on agricultural food production as well as biodiversity.

Hydrogen has a high energy density (energy/weight ratio) and combusts cleanly with oxygen in the air to produce just steam. But storing hydrogen is problematic as it requires very low temperatures and/or high pressures to be maintained as a liquid, and is difficult and dangerous to handle. Ammonia (NH3) is much more manageable and can serve as a vector for hydrogen.

At present hydrogen is mainly produced from methane in natural gas in a process that also emits carbon dioxide. In future ‘green’ hydrogen can be produced from sustainably-produced electricity used for electrolysis of water. The idea is that when there is surplus energy generated by wind or solar plants, it is applied to this, thereby saving the surplus energy in a usable form. Green hydrogen can then be reacted with nitrogen from the air by the Haber-Bosch process to make ammonia.

To provide jet engines with a fuel they can use, a proportion of the ammonia needs to be ‘cracked’ catalytically to produce hydrogen and nitrogen. Reaction Engines’ heat exchanger expertise uses exhaust heat to drive this process and provide a zero-carbon fuel blend of ammonia and hydrogen that burns stably just like the kerosene used for jet fuel today. 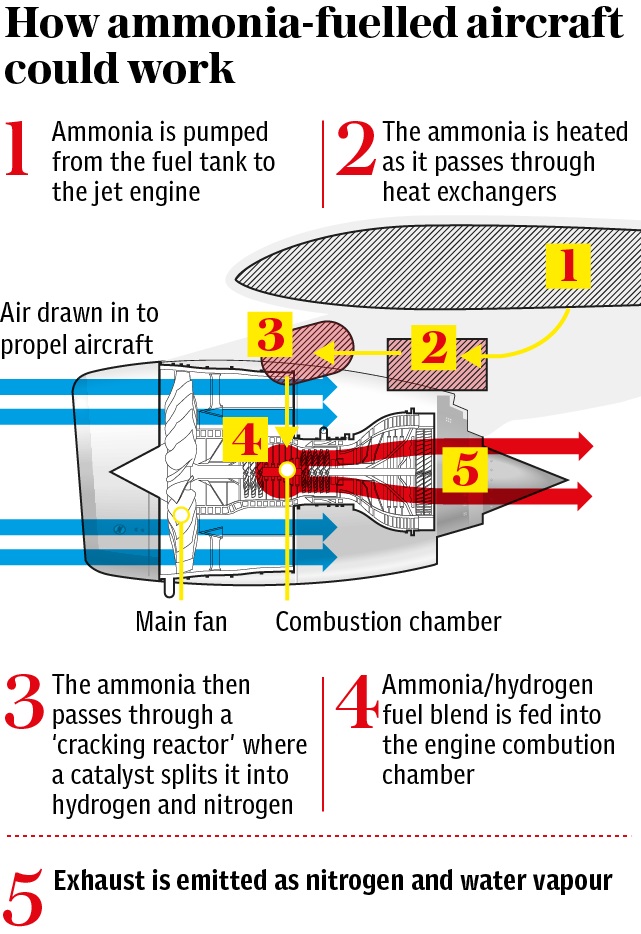 Two per cent hydrogen is required in the ammonia mix to stabilise the flame, but a conversion ratio of up to 30% would enable the hydrogen/ammonia mix to more closely match the thermodynamic output of kerosene. The energy density of ammonia is less than that of conventional jet fuel, and while the power provided by the engines might closely match that of kerosene, the range of aircraft would be reduced by around 50% for the same weight of fuel.

Further challenges outside the scope of this project that need to be overcome  to adapt aircraft to using ammonia include the fuel storage and management infrastructure, the physical inclusion of hardware required for the catalytic conversion process, the minimisation of oxides of nitrogen in the exhaust gases and the aircraft heating system which uses heat bled from the engines’ compressors.

Professor Bill David from STFC and the University of Oxford said:

“We are optimistic about progress, having recently completed the first stage of laboratory tests where we successfully produced the combination of ammonia and hydrogen that mimics jet fuel. Our next step is to scale up to small aviation, and we are confident that we will achieve this goal. Green ammonia storage and real-zero ammonia-hydrogen fuel mixtures have the potential, not only to enable carbon-free, and indeed guilt-free, aviation but also, in time, to completely remove our dependence on fossil fuels.”

Importantly, as Dr James Barth of Reaction Engines points out, the study shows that “an ammonia-fuelled jet engine could be adapted from currently available engines, and ammonia as a fuel doesn’t require a complete rethink of the design of civil aircraft as we know them today. This means a fast transition to a sustainable aviation future is possible at low cost. Ammonia-powered aircraft could be serving the world’s short-haul routes well in advance of 2050.”