Antibody therapeutics are becoming increasingly important for the treatment of many diseases, with the global market now worth more than $100bn.

But discovering game-changing medicines is not for the fainthearted. Although the stakes are high, the barriers to success are even higher.

share
go deeper
Using its proprietary antibody discovery technology platform HEPTAD, the Oxfordshire-based team has discovered antibodies which have led to the development of drug discovery programmes in chronic kidney disease and cancer.

“They’re really interesting as drug targets. You can hit and modulate them to help alleviate diseases but because they sit in the membrane of the cell and have very complex structures, it’s been extremely difficult to discover antibody drugs against them.”

He adds: “There’s a huge amount of interest in GPCR’s as drug targets, and in antibodies as potential drugs, but no one’s been able to stitch those things together and that’s what we do.”

Australian-born Llewellyn completed a DPhil in Clinical Medicine at Oxford University and a postdoc in Immunology and Infectious Diseases. While there, he met co-founder and chief scientific officer Joe Illingworth, whose post-doc work focused on antibody inducing vaccines.

Their main focus is a fibrotic target, leading to fibrosis of the kidneys and the liver which is potentially a game-changer, since fibrotic diseases in major organs affect up to one in five of the world’s population.

“A lot of those processes are regulated by these molecular switches on the outside of cells,” Llewellyn explains.

“Your lung pumps out a bunch of factors that say ‘Look, I’m stressed.’ These stick onto the receptors on the outside of the cell – a stress-response cell. Then that cell says: ‘We’ve got to go and fix this,’ and they go and do that.

“If that’s all working properly, that’s great but if those cells don’t get activated, or they get activated too much, suddenly something’s going wrong. Either that stress response is not being fixed, or it’s being fixed at such a high level you get all these weird fibrotic processes or cancers that grow too much.”

Since they started DJS Antibodies in 2015, the company has grown to a team of five based at Heyford Park Innovation Centre near Bicester.

Pre-seed round cash from Johnson & Johnson’s pharma innovation fund supported them when they launched, while the following year they won seed round funding from Oxford Sciences Innovation (OSI).

Llewellyn says: “Over the past four years OSI has founded more than 70 companies, so it’s an exciting and growing ecosystem to be part of.”

DJS has also been awarded three Innovate UK grants, the most recent in April last year. 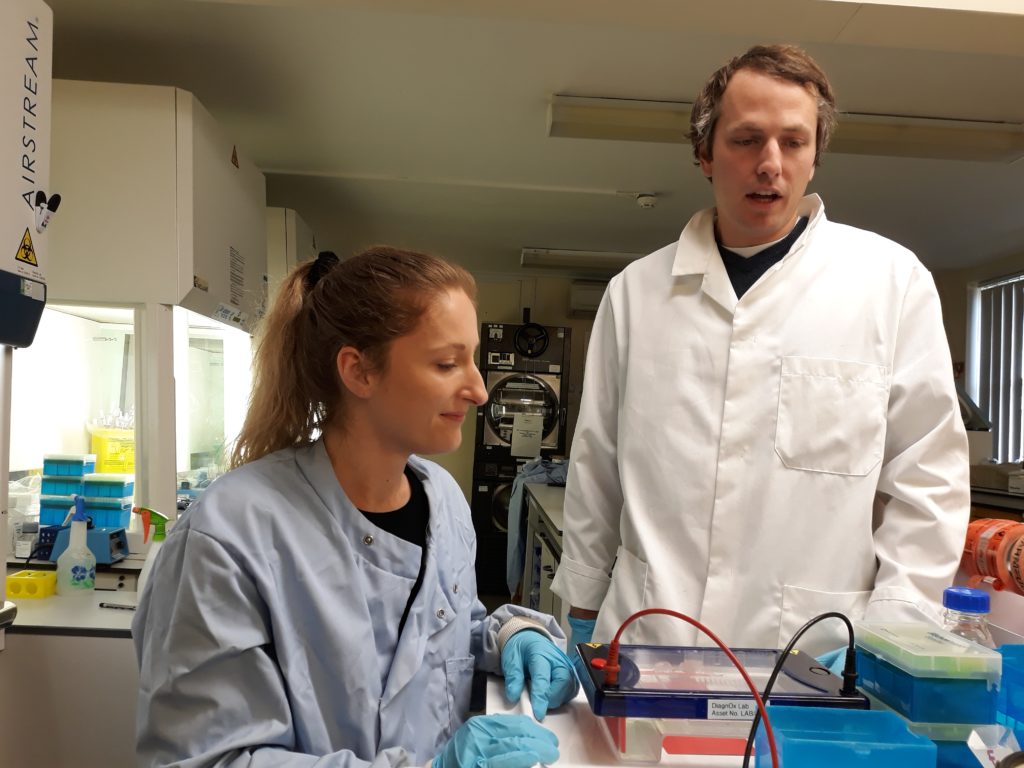 As for the company name, Llewellyn wishes it had more poetic origins but the truth is more prosaic.

“We wrote an application for a start-up accelerator, which we poured over and re-read a hundred times before pressing ‘send’ about 30 seconds before the deadline. It bounced back instantly with a message saying we hadn’t entered a company name, so we looked at each other and said ‘s**t.’ “There were three of us sitting there – me (Dave), Joe and a guy called Simon, so we just went ‘DJS’ and we’re going to make antibodies. Done.’ And with five seconds to go, we submitted the application.

“We’re open to grand rebranding opportunities but for now, we’re DJS,” he adds.

Discovering and developing a new drug is eye-wateringly expensive, typically taking 10-15 years and costing anything from £20m to several hundred million.

Llewellyn and Illingworth didn’t pay themselves for the first 12-18 months and their starting budget of £75,000 was in biotech terms, “laughably small”.

He recalls: “We rented lab bench space because we couldn’t afford to kit-out a lab. A single piece of equipment was greater than our entire budget.”

Although they now have their own lab, they still make use of the innovation centre’s shared lab. “It’s a great resource,” he adds.

The team is now seeking investment of £4m through large institutional and corporate VC funds, to take their lead fibrosis programme to the point of completion of pre-clinical science.

Having presented their work to a number of potential investors, Llewellyn is optimistic.

“There are many investors out there, all of whom are looking for something particular,” he says. “Our job is to find the ones who share our vision of building an exciting new company to deliver novel antibody medicines to big healthcare problems.”